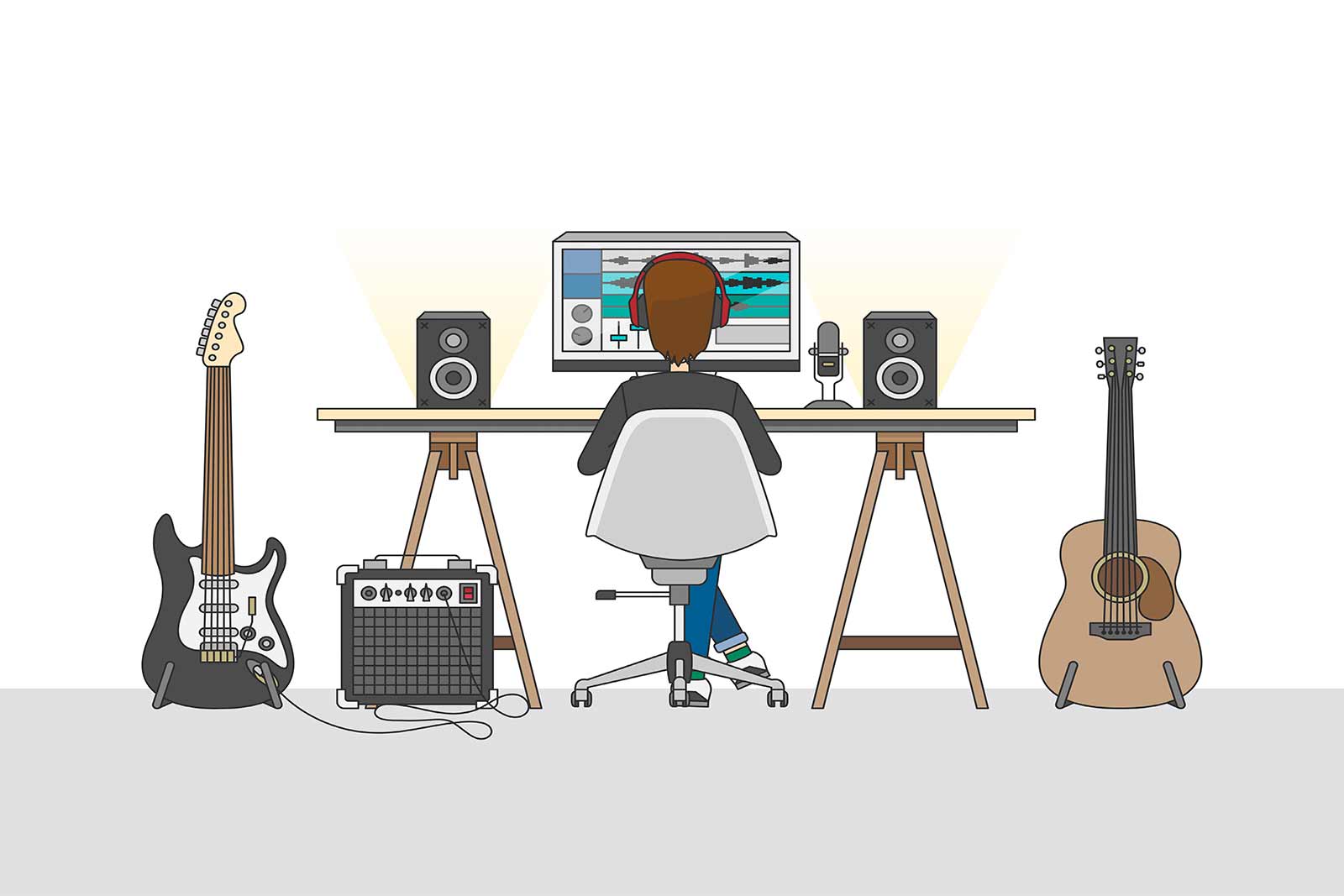 A lot of inquiries for music production training come to us from smaller cities like Gwalior, Patna and Pune (if they can be called small cities anymore!). These guys are fresh out of college with enthusiasm and money to spend on music education but most of them are befuddled about the rigor and discipline required to learn music programming. We have been turning away most people after an interview because we think that they will not be up to the challenge of creating chart topping hit music. Do remember we are only training people on the intricacies of song making and not sound design or background scoring though a person with high interest and inclination towards his / her craft can quickly pick up other aspects of music production on their own or by enrolling in specific training courses once their basics are in place.

Programming Music is not Easy

Learning to program music is not an easy task and let me underline that here in bold. There is no magic button on the software or on your midi controller that if pressed will conjure up a beautiful song within seconds or minutes. A good song that touches your heart or makes you want to dance has dozens of hours of precise hard work behind it. It is the result of hundreds or even thousands of calculated and sometimes not-so-calculated decisions taken with a creative as well as a technical bent of mind. There is sweat and toil behind the craft – much more than what the common man or woman can endure! Of course it is easy to create a passable song easily but to create a good song will take a lot more out of you than just cutting and pasting pre-recorded loops.

It’s All About Entry Barriers

Have you realized that almost everyone is a writer! And indeed one out of ten people claim to be writing a script! Why? Because it is easy to be a writer! All you need is an idea in your head, a basic computer and MS Word! That’s all! So everyone is hammering away at their computers trying to write a hit film. It doesn’t take too much creativity (human beings are naturally wired to be storytellers!), almost no training required, zero investment and well, its actually easy to create a good finished script which may even be good enough to go into production! The barriers of entry to this profession is very low which is why, there is tremendous competition in this field and why it is almost close to impossible to sell your script or scripts in one lifetime even though you may be seriously good.

Now how many good music producers can you find? And when I say music producers, I don’t mean youngsters armed with pirated copies of FL Studio and creating techno and EDM songs with nothing else but a mouse and a Logitech typing keyboard! I mean thoughtful, intelligent and creative music producers who know their craft and listening to their songs are a joy. The answer is: Tiny when compared to the population of our country. Why? Because the barriers to entry are formidable! You need to invest a couple of hundred thousand rupees atleast to begin with to buy all that software and hardware. The investment is actually a lot lesser today than even five years ago. Then you face the prospect of slow progress if you try to learn to use the software on your own. It’s almost next to impossible to achieve any kind of progress without formal training either at training institutes like ours or working with a more experienced music producer. That again entails spending a sizeable amount of money for a course or atleast a year doing slave work for a reputed music programmer! Then of course there is the big question of creativity. As most guys soon find out, there is a huge amount of creativity and talent required to even create a good foot tapping song. It cannot be created by cobbling together some samples from here and there. You need to have spent atleast a year knowing music theory before you even start to think about trying to learn to be a music programmer! So there you see, why learning music programming is an arduous task indeed. But it’s worth learning. Why? Because since the barriers of entry are so high, those who have mastered it are raking in the moolah! And need I mention, also enjoying the perks of creating sweet, beautiful music for the rest of their lives!

So let me put down a few pointers on the qualities that are absolutely required of someone who wants to create music on a DAW (Digital Audio Workstation). If you dont have these qualities, it will be difficult for you to succeed.

This is absolutely essential. You must not attempt to get into this business if you do not love music in all it’s forms! If the idea of even listening to music for extended periods of time at high loudness levels irritates you, then how you can remain with a project or a composition with repeated listening for days or even a month on end? It would be pure torture for you! It is futile to get into this business just because the music business sounds glamorous with high earnings at the top. There are easier ways to make money in life or to attract female attention if that is all you desire! The best music producers live, breathe and drink music. There is always music playing around them 24 / 7 and they just cant have enough of it!

2. AN ANALYTICAL BENT OF MIND

If you like probing, digging, analysing, taking things apart and trying to figure out how they work, then you are probably THE best candidate to learn music programming. Much of what you create will be by standing on the shoulder of Giants and listening to what is already out there. Much research and analysing will also have be done on the softwares by constantly understanding the functions of the dozens of plugins, sequencers and sound libraries out there and understanding what will work best for your style of music and what will not. This will entail endless hours of listening, creating, sampling, testing, rejecting, copying, recreating and bench-marking against the highest standards of music that has already been created in before. Without an analytical and research-oriented approach, you will fail to reach the highest echelons of this craft.

3. A BLEND OF CREATIVE & TECHNICAL PROWESS

This business requires you to grasp a lot of technicalities that can befuddle those who just cannot live up to or understand technical ‘jargon’. If you are someone who does not understand or stays away from ‘jargon’, a word of advice – STAY AWAY FROM MUSIC PROGRAMMING!’. A music programmer is not just a creative person but also an engineer! I would even go ahead and say that the word ‘music programmer’ be abolished and the term ‘music engineer’ be used instead. In reality, the simplest 3 minute pop song has precise and intricate sound engineering principles behind it. A good music producer must not only understand how to arrange but also create a good initial mix to impress people (with money) around because what good is an arrangement if it sounds muddy or bereft of good sound engineering principles. Here’s a test – buy Sound Engineer Bob Katz‘s book on Mastering here from Amazon (just Rs. 1,500/-). You will anyways need this book in the future as a go-to manual from time to time. If you cant get through even one chapter without feeling sleepy, then this business is not for you because you will need to read and devour many similar books, web articles and videos written by knowledgeable peers and renowned sound engineers around the world as you progress and if technical stuff puts you off, you will have no hope at becoming better in your craft.

This is a no-brainer and the shortest point in the article. If you do not understand even basic theory and do not know what chords are, need I mention, join a music instrument class first – be it learning to play the guitar, piano or even the Sitar. Music programming is like going to university. What you need now is join a kindergarten school!

Call it tenacity, persistence, dogged determination, burning zeal or focus – these are essential qualities and attributes for attaining success in any artistic field. You will need a whole lot of this as you move on. There will be days filled with self-doubt, pessimism, depression, animosity, hysteria and what will sail you through these trying times is tenacity, grit and determination. The ability to get up every morning, drink your coffee and brush away all negativity and start afresh on the tenth version of that song is what will eventually make you a winner and need I mention – very rich some day!

Now this may be pushing it! But you actually need to have some nerdy qualities to be a good music programmer. A social recluse, an introvert, someone who hates to be in the company of others maybe the perfect music programmer because he / she would have ample time to work in seclusion! Much like writing novels or software code, producing music is a solo effort best worked under long hours of solitary confinement, staying glued to the computer for days on end, leaving the workstation only when there is a real and present threat to life! The average Raj or Ritesh would rather be on vacation at an exotic place, or watch movies at the cineplex and hanging out at the mall indulging in small talk with his gang, all of which the nerd finds pointless and meaningless. Even in the rare moments that the nerd spends in the company of others, he snivels, sulks and gets withdrawal symptoms and finds his mind constantly craving to be back in his safe and secure swivel chair in front of the computer where he / she can produce a new song! So the nerd rarely socialises, rarely parties and works on his music when others are out enjoying themselves. If you are a nerd, welcome to the club. You have it in you to be a good music producer!

P.S. A strong grasp on Her Majesty the Queen’s language is highly preferable if you want to excel in this business because most of the communication on the internet, books, blogs, videos are in English and having a good grasp over the language will help you learn fast! As far as I know, gearslutz.com does not have a Hindi or Marathi translate button! Good luck!